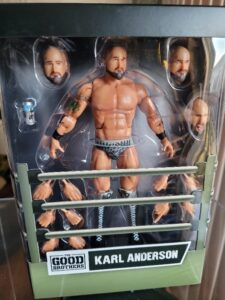 Much like the Myers and Cardona figures, the Good Brothers figures are highly detailed and are loaded with accessories. Doc Gallows wears a camouflage vest and pants. Multiple hands are included, along with four different heads (different expressions and one is wearing a baseball hat). Karl Anderson has grey tights and knee pads, along with black boots. His figure includes multiple hands and four heads as well. Both figures also include a beer can. If I have a complaint, it’s the faces for Doc Gallows. Super 7 always seems to be a bit off with the faces and this set is no exception. The Gallows faces kind of look like Anderson to me. 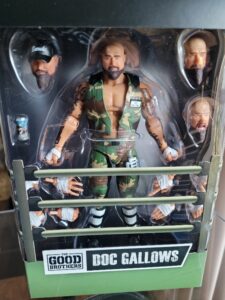 As with all Super 7 Ultimates figures, the packaging is top notch. Each figure includes an outer brown box, a fancy second box inside, and the figures are showcased in a nice clear package for display. Even though they are pricey (the Good Brothers go for $44.99 or $47.99), if you are a big enough fan of this team, it’s almost worth getting a set for display and a set to take out of the box. You can find these top level figures at ringsidecollectibles.com, entertainmentearth.com, and bigbadtoystore.com. 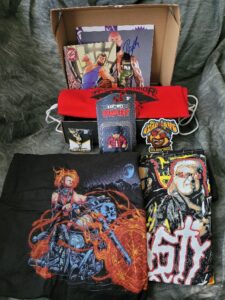 This month’s charity is the Danhausen Leg Fund. You can find out how to sign up for Pro Wrestling Crate at prowrestlingcrate.com.

-Wrestling Superstore has new figures in stock on its website including Jimmy Jacobs (two versions), Brian Pillman Jr., Juice Robinson, David Finlay, and Jay White. The figures go for $29.99 each and are available at wrestlingsuperstore.com. According to a report in the Wrestling Observer, Ring of Honor’s deal with the company ends on 3/31.

-Toni Storm launched an OnlyFans page last week and it has been a super success thus far. The subscription price is $19.99 per month. You can sign up at onlyfans.com/realtonistorm.

-While you’re in the Dallas-Fort Worth area, WWE Smackadillas will be available through Uber Eats, Doordash, and Grub Hub. The menu includes quesadillas, pizza, and more. Get more information at wwesmackadillas.com.

-Speaking of food, Pro Wrestling Tees has launched Powerbomb Pizza. Powerbomb Pizza is billed as combining wrestling with classic pizza recipes. Profits from the pizzas go directly to the wrestlers and/or their families. Pizzas are available for Roddy Piper, The Godfather, Mick Foley, Vader, Rob Van Dam, Bret Hart, and more. Currently, the pizzas are available in Huntington Beach and Las Vegas, with other locations coming soon. Get all the information at powerbombpizza.com.

-Game Stop has a purple metallic Funko Pop figure of Razor Ramon available for pre-order for $12.99 at gamestop.com.

-WWE released its new 2K22 video game recently. My unofficial conclusion from reading opinions on Twitter is that people seem to like the game.

-Check your local Target stores for a WrestleMania display featuring figures from the WWE Elite 89 and 90 series.

-Impact Wrestling posted new t-shirts for Tasha Steelz, Honor No More, and Rebellion. You can find them at shopimpact.com.

Highspots has a virtual signing with Jake Atlas on 3/22, Virtual Gimmick Table on Facebook Live on 3/24, and Box-A-Mania on 3/26. Get all the information at highspotsauctions.com.