The final comic in the Luchaverse prelude series featuring Konnan will be released later this month. A preview from graphicpolicy.com is available for free and features the first five page of Luchaverse: Konnan & The Ambassadors. You can read the five page preview HERE. 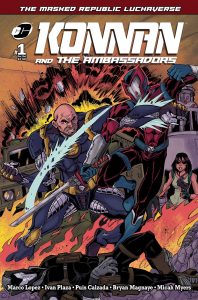 Radican’s Analysis: I’ve ready the first two books in this series and I highly recommend them to anyone that’s a fan of action comics and wrestling. This has been a fantastic series so far from Masked Republic and Chido Comics.

You can read the entire press release on Luchaverse: Konnan & The Ambassadors from Masked Republic and Chido Comics below:

Luchaverse: Konnan & The Ambassadors is an action-adventure series that has been described as SHIELD meets X-Files as Konnan leads a covert team charged with disproving some of the world’s biggest conspiracy theories while possibly protecting the universe from the truth behind others.

“As the leader of The Ambassadors, Konnan has faced off against doomsday cults, alien invaders, rogue temporal thieves and civilizations at the center of the earth. Now, the organization faces its greatest mission: getting to the bottom of a seemingly unstoppable series of worldwide catastrophes of unknown origin. Ambassadors’ bases are being destroyed one by one by a new global criminal faction calling themselves the Knights of Draconis! Will this ruthless and cunning organization on the rise put an end to the Ambassadors and all that they protect?”