”The Pull List” is a new feature column that looks at a mix of the most noteworthy topics in wrestling, PLUS comics, books, Movies & TV Blu-Ray releases, and video games along with reviews and commentary in each category.

(1) NJPW “Wrestle Kingdom 9,” Jan. 4, 2015. (10.0) – This was the deepest and most satisfying offering from any wrestling company this year with tremendous wrestling up and down the card. The real highlight is the incredible double main event of Shinsuke Nakamura defending the IWGP IC Championship against Kota Ibushi in the semi-main event and Hiroshi Tanahashi defending the IWGP Hvt. Championship against Kazuchika Okada in the main event.

Nakamura-Ibushi and Tanahashi-Okada are both five-star matches and it’s extremely hard to decide which one is better, but I give the edge to Nakamura-Ibushi because of the physicality and great chemistry between them. I won’t argue with anyone that says Tanahashi vs. Okada was better, as there are clear arguments that can be made to put it above Ibushi-Nakamura. Ultimately, it comes down to personal preference.

(2) Beyond Wrestling, “Greatest Rivals Round Robin,” Sept. 26, 2015. (10.0) – This is one of my favorite independent wrestling shows of all-time and it was the best independent show I’ve seen since DGUSA’s first show, “Open the Historic Gate.” This was Busick’s farewell to the independent scene and what better way for him to go out than to face four of his biggest rivals on the indies in a round robin tournament.

Drew Gulak, Timothy Thatcher, and Eddie Edwards joined Busick in the round robin, which produced several really good matches and a couple of excellent matches in Gulak-Edwards and the main event with Busick facing his top Beyond Wrestling rival Eddie Edwards in the main event. Edwards-Busick told a tremendous story and is my current top match of 2015.

(3) NJPW, “G1 Climax 25 Finals,” Aug. 16, 2015. (10.0) – This was an amazing final show. Delirious opening the show was unexpected, but his announcement that ROH was going to run shows in Japan with NJPW was great. The show was bolstered with the legends making appearances, including Tenryu challenging Okada to a match in November at his retirement show and then the first G1 finalists, Chono and Mutoh, coming out to watch the main event. There were several great matches on this show including The Young Bucks-ReDRagon and Ricochet-KUSHIDA matches. The real treat here was the amazing MOTYC between Tanahashi and Nakamura.

Looking back, this was an amazing finale to what was a tremendous final week to the G1 Climax tournament with a new expanded format. Nakamura had been uneven with his performances during the tournament wrestling with an arm injury, but he was tremendous in the final match in a losing effort to Tanahashi. This show felt epic and they set up a lot of angles to prop up the next several months from a storyline standpoint.

(4) WWN Live Supershow, “Mercury Rising 2015,” March 28, 2015. (9.5) – This was a tremendous show during WrestleMania weekend from WWN. The show featured two incredible matches with DGUSA Champion Johnny Gargano vs. EVOLVE Champion Drew Galloway bolstering the undercard and delivering an incredible war and Thatcher-Hero having an incredible atmosphere that saw the fans go crazy for their entire encounter.

It’s clear that EVOLVE made a star out of Timothy Thatcher during WM weekend. He had some fantastic performances, but his match against Hero is well-worth going out of your way to see. Hero was portrayed as a badass cocky heel throughout the weekend, but Thatcher always lurked in the background as the person that wasn’t intimidated by him and wouldn’t engage in verbal warfare. They had an incredible match and with the rest of the card delivering solid action this show was amazing.

(5) EVOLVE, “EVOLVE 45,” July 10, 2015. (9.5) – EVOLVE has put on some really good show this year, but this one gets the last slot in my top five shows of 2015 due to the incredible match between Zack Sabre Jr. and Roderick Strong. The main event of Galloway vs. Thatcher with the DGUSA and EVOLVE Championship on the line cemented this as one of the more memorable events of 2015.

EVOLVE decided to go all-out with the injuries to Biff Busick and Davey Richards, which forced them to reshuffle the card. Due to the shuffling of the card, EVOLVE was able to present a match between Zack Sabre Jr. and Roderick Strong before Strong signed a contract with ROH that prevented him from working with EVOLVE.

They gave away a ton on this show and the big matches delivered in spades. Lee-Hero was another excellent match in the ongoing series between them on the independents. They have incredible chemistry in the ring. Strong vs. Sabre, Jr. is one of the best matches I’ve seen all year and you should go out of your way to see it as soon as possible if you didn’t watch the show live. The main event, with Galloway putting up the DGUSA and EVOLVE titles against Thatcher in a match that was originally supposed to be non-title, was excellent. They managed to follow the Sabre-Strong match, which was a monumental task in itself. Thatcher and Galloway went to war and the match produced a surprise title change that shocked the fans in attendance.

This is a running list of the top 10 best matches of 2015. I still have things I need to catch up on and watch, so I will be adding new additions to this list throughout the year. I will eventually make a separate post of my entire 2015 MOTY list and keep it updated regularly. I will also update the top 10 list in this column.

“San Andreas” starring Dwayne “The Rock” Johnson as Ray Gaines, an LAFD helicopter pilot, is an action movie that reels you in with the promise of seeing California crumble to bits. It’s a digital wonderland of special effects that carry the movie from big moment to big moment, but ultimately the script falls short because Gaines doesn’t seem to care about saving anyone other than his estranged wife Emma (Carla Gugino) and daughter Blake (Alexandra Daddario).

The San Andreas Fault gives and sets off a massive earthquake in Los Angeles. One of the strengths of the movie is that it makes you care about the Ray and his family members through the use of a good storytelling device that unfolds the history between Ray, Emma, and their daughter Blake, who is in college.

Ray is on duty when the earthquakes strike and he goes right away to rescue his wife, who is eating lunch in a large building in downtown LA. As the building crumbles and Emma tries to make her way to the top to meet Ray, Director Brad Peyton gets some great shots of the chaos in the city.

The movie keeps a good pace from that point forward as Ray and his wife head to San Francisco to rescue their daughter, who has been left trapped in a car and abandoned by her mother’s new boyfriend.

There is chemistry between Johnson and Gugino on screen and they do a good job of keeping you invested in their story as they try to get to their daughter and explore what went wrong with their relationship that lead to their separation. It also doesn’t hurt that Johnson and Gugino have worked together on two other movies in the past.

Although some action movies allow you to turn your brain off and forgive plot holes, it was difficult to overcome a big one in the script for this movie. As much as Ray seems to care about his family, it’s hard to believe that as the world falls apart around him he doesn’t care about anyone else, especially as a first responder. With the world falling apart around him Johnson, has tunnel vision when it comes to rescuing his family and does very little to help those in danger around him.

That being said, Johnson has grown into a good leading man. He shows his acting skills in this movie playing a concerned parent that is not only trying to save his child, but also dealing with issues from the past involving his family.

It’s hard to believe that a wrestler could come out of WWE and become a leading man in Hollywood, but Johnson has done it. Johnson has screen presence and although this role suits him well, he doesn’t get to show off his comedic chops and timing here as he plays things straightforward save for a cliché line at the end of the film. The main letdown of “San Andreas” is that the script did a solid job of making you care Ray and his family, but it comes undone because Ray and his wife appear to care very little about the others around them.

The Blu-ray special features for “San Andreas” make this release worth consideration for a purchase. It goes a long way when the director sits in on commentary to provide insight into the making of the movie, as Brad Peyton does for this release. One of the best parts is that the director’s commentary ties into the special feature called “Dwayne Johnson to the Rescue.”

There are other short featurettes as special features as well including “San Andreas: The Real Fault Line” where Peyton and others discuss how they tried to take liberties by creating a fictional event based off the real San Andreas Fault Lines. I also appreciated that the director did commentary on the deleted scenes and mentioned why they were filmed and ultimately left out of the movie.

Overall thoughts: (7.0) – The good outweighed the bad when it came to my enjoyment of “San Andreas.” The script and acting from Johnson and Gugino made me care about their characters, but unfortunately this was undone by Johnson’s character Gaines not bothering to try to save anyone else as the chaos of The San Andreas Fault Line giving unfolded around him.

The special effects were really good and it was amazing to watch the damage of the earthquakes take their toll, especially on landmarks in Los Angeles and San Francisco. Johnson was really good in this movie and is clearly leading man material, but the script didn’t allow him to accentuate his strengths as an actor, which are humorous quips and one-liners.

I appreciated the depth of the special features on the Blu-ray, DVD, and HD Digital combo pack. The featurettes were short, but having the director commentary track with Peyton made that easily forgivable, especially since the featurettes in the special features compliments many of the things he discusses about the biggest scenes in the movies. I give this movie a solid recommendation.

PWTorch and Powerbomb.net are teaming to give away three Bullet Club Too Sweet Foam Hands later today. To enter the contest follow Sean Radican on Twitter @SeanRadican and RT the contest tweet when it is posted later today. Three winners will be chosen on Oct. 14 at 8:00 p.m. EST. 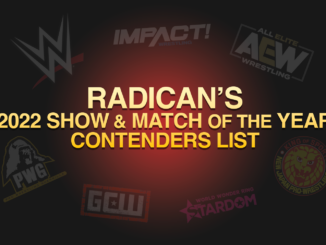 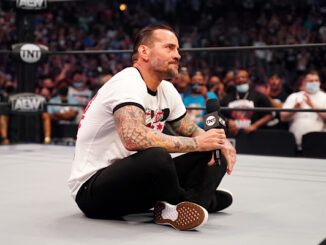