Wrestling trading cards have been around since the late 1800s, and one set in particular stands out as the landmark set for collectors: 1982 Wrestling All-Stars.

The 1982 Wrestling All Stars set was available only by mail through an ad in The Wrestling News that ran during the first six months of 1982. The cost for a 36-card Series A set was a mere $5. The cards were sent to customers in a cellophane wrapping. Each card features a colorful border around a color photo of the wrestler. Border colors include yellow, red, blue and purple, among others.

Today the 1982 Wrestling All Stars set is one of the most sought after sets in the hobby. Super collector David Peck has the top collection in the world, with an astounding 16 complete 1982 Series A sets, including one set with all cards graded mint or higher by Professional Sports Authenticator (PSA); the mint set took him more than seven years to complete. Peck provided the pictures that are included with this column. 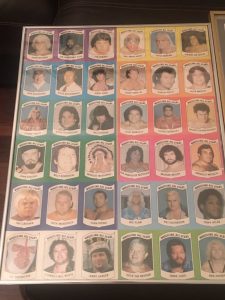 So what are the top cards in this historic set? This list is comprised of the five cards that are the most commonly graded by PSA and Beckett Grading Services (BGS), the two premier companies for grading and authentication. Population reports — the number of cards graded and how many of each card have received each grade — are available online at psacard.com and beckett.com, respectively.

PSA and Beckett have slightly different grading scales: PSA’s top grade is a “Gem Mint 10,” the equivalent of which is a BGS “Gem Mint 9.5.” BGS also offers a very rare “Pristine 10” grade, but no 1982 Wrestling All Stars have ever received that grade.

Grades are based on factors such as centering, corners, surface, and edges. With the 1982 Wrestling All-Stars set in particular, certain cards are more likely than others to receive more favorable grades. For example, Peck noted that the yellow cards in particular — which includes Hulk Hogan and Andre the Giant — are notorious for centering issues, which can affect the value of a card and the grade it is given.

Another major factor for these cards is the location of the cards on an original uncut printing sheet and where the cards were placed in the set when they were mailed to collectors. Cards that were centered on an uncut sheet and in the middle of a set had more protection, so are more likely to receive better grades.

“Andre was on top of the back, so he is the most susceptible to corner wear,” Peck said.

David Peck’s collection of Wrestling All Stars — which includes 1982 Series A and B and a 1983 series — must be seen to be believed. His in-depth site, 1982wrestlingallstars.com, has links to his cards, facts about the sets, articles about his collection and more. You can also follow him on Twitter @dpeck100.

Five Count is a new format for the Pro Wrestling Torch’s long-running collectibles column, which began in 2011. Each week will feature a new top five list: items of a particular wrestler, hot cards or figures, collectibles news items and more. If you have a topic you’d like to see covered in the new Collectibles Column 5 Count, contact Michael Moore at michaelmoorewriter@gmail.com or @MMooreWriter on Twitter.

KROL: A month-by-month walk through AEW’s tribulations in 2022 and analysis of how Tony Khan handled them